Talk About the “WOW” Factor

The audience is settled in, grooving to the sounds reminiscent of Fleetwood Mac, and letting the music take them back to those mid-late 70’s when rock was being defined. That’s when they hear the jungle rumblings of a cool, quirky song called “Tusk.”  But wait—what’s happening?  An odd spot for a drum solo . . . Hold on!  There’s kids coming down the aisles – they have instruments!  WOW!!!

That’s right Maskers!  In a similar way to Fleetwood Mac’s live concert album called The Dance, we enjoy including the local talent of young people in our theatre performances.  Fleetwood Mac hosted the USC Marching Band.  We have, so far, hosted members of Lafayette’s Acalanes HS Jazz Band (three times and counting) and, most recently, members of Alameda’s St. Joseph of Notre Dame HS band.
From my perspective, as the one who is in direct contact with the kids, the experience could not be more enjoyable.  I am a K-8 grade music teacher in Dublin and I know how to work with kids.  I met up with the Acalanes players one evening before our show in Lafayette for the first time.  In one hour we: sight-read through the music (my arrangement of “Tusk” based on the The Dance version); memorized the music, practiced playing while walking; blocked out the entrance and movement for the performance; added some choreography, and discussed what to wear!  ONE HOUR!!  Let’s just say that’s a learning curve I’m not used to!  The experience with the St. Joseph’s kids was equally fun and easy.  For this past show at the Historic Bal Theatre in San Leandro, we added “Don’t Stop” to their plates and, of course, they gobbled it up and rocked it!

How do the kids feel about all this?  I like to think that in the case of the Acalanes kids, the fact that they’ve accepted every invitation since Town Hall, tells me they enjoy the experience.  After the show in Berkeley, one player was overheard telling a first timer, “See?  I TOLD you it was cool!”  Vanessa from St. Joseph states, “I really had a fun time performing with you guys.  Being a singer, dancer, and actor, I’m not used to being down (in front of the stage) with the audience.  It was fun interacting with the crowd and feeling the energy of the audience in a whole new way.  I had a great time!”
Fleetwood Mask loves sharing the stage lights with young people and we will continue to extend the invitations to our tried and true players and hopefully, as the word gets out, to new players from different schools. 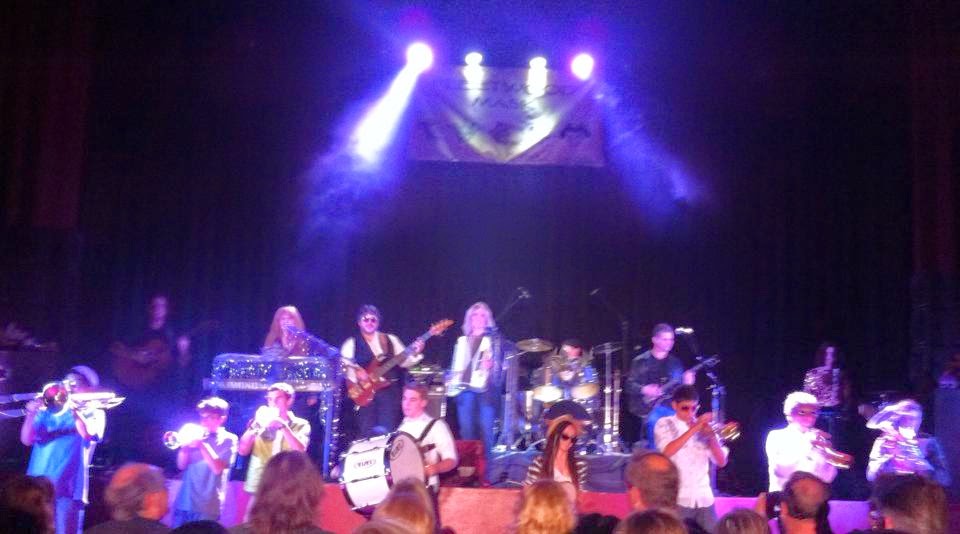